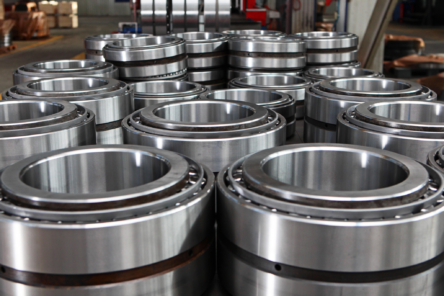 Any bearings manufacturer who has experienced corrosion on his or her goods knows how critical proper protection is to avoid later delays and rejection. Oxidation occurs all too easily on smoothly polished bearings surfaces exposed to fluctuating humidity, temperatures, and condensation during shipping and storage. While Cortec® VpCI® papers and films are some of the most convenient protective options, some bearings manufacturers may prefer to apply liquid rust preventatives for one reason or another. In this case, it is important to remember that conventional is not necessarily better.

Cortec® Corporation has developed outstanding alternatives to traditional mineral-oil based rust preventatives (RPs). Among these sustainable alternatives is EcoLine® Cutting Fluid, a biobased rust preventative concentrate that rivals traditional RPs in terms environmental impact, user safety, cleanliness, convenience, and even performance! EcoLine® Cutting Fluid offers multi-metal protection to bearings in shipping and storage and is an excellent environmentally sound alternative to petroleum derived products. It has a wide dilution range for greater economy and flexibility. Unlike traditional rust preventative oils, an emulsion of EcoLine® Cutting Fluid leaves a dry film that is virtually undetectable on the surface of the metal, helping to create a cleaner workplace and preventing material waste.

EcoLine® Cutting Fluid to the Rescue for Bearings Manufacturer

EcoLine® Cutting Fluid proved its advantages for bearings protection when it was tested by a Montenegro manufacturer of bearings, bushings, and used in engines produced for two major car companies. The auto parts were made out of a special aluminum alloy that was corroding in transit during two to four months of export in seagoing containers. Although the manufacturer was applying traditional rust inhibiting oils, the high-tech engine components were still having problems with oxidation and pitting, which caused significant losses for the company in terms of delays and rusted parts.

The manufacturer decided to test EcoLine® Cutting Fluid in their laboratory. Promising results prompted them to implement a pilot trial and eventually a full-scale plant-wide implementation. Not only did their EcoLine® Cutting Fluid emulsion show extended protection in field testing of up to 12 months, but the rust preventative also created a layer less than 1 micron thick, thinner than the previous oil—which apparently did not satisfy tight tolerances—and compatible with robotic assembly. All these benefits came simply by substituting a more environmentally responsible rust preventative for an ineffective oil-based standby.