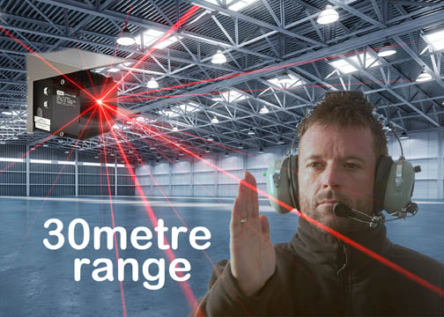 Link Microtek has unveiled a new version of its Azdec optical MLC (mobile local communications) system featuring a range of up to 30 metres – three times greater than the capability of its established technology. This development opens up new defence-related applications for the Azdec system, which provides totally secure, non-RF, cable-free communications.

Particularly suitable for use in large hangars or open spaces where radio-frequency transmissions might jeopardise security, the new Azdec 30 system allows operators to communicate with one another while roaming freely, unhindered by any trailing wires. The extended range of the system means that it could also be used in through-water communications scenarios or for transmitting, say, video from and data to unmanned ground vehicles involved in explosive ordnance disposal.

Originally developed using infra-red technology to provide secure bridge communications on board naval vessels, the Azdec system delivers crystal-clear voice communications using micro-LED arrays transmitting at a wavelength determined by the requirements of the specific application. The system carries a Class 1 product designation as defined by the EN 60825-1 standard, which means it presents no ocular or other health hazard to users.

The optical digital encoding technology at the heart of the system is completely immune to radio, radar and electrical noise – even severe energy pulses – and has no effect on sensitive electronic equipment, flammable atmospheres or munitions. There are no RF emissions and the signals cannot be intercepted by any conventional method, so it is impossible for anyone to jam the transmissions or eavesdrop on what is being said.

The Azdec 30 system has been optimised for extended-range operation by means of a redesigned communication protocol and reshaped transmission/reception patterns. A typical installation comprises a compact base station, a number of fixed antennas, a choice of headset styles, operators’ belt-mounted battery-pack/control units, and a central battery-charger unit. 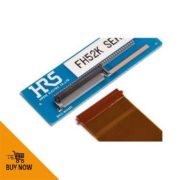